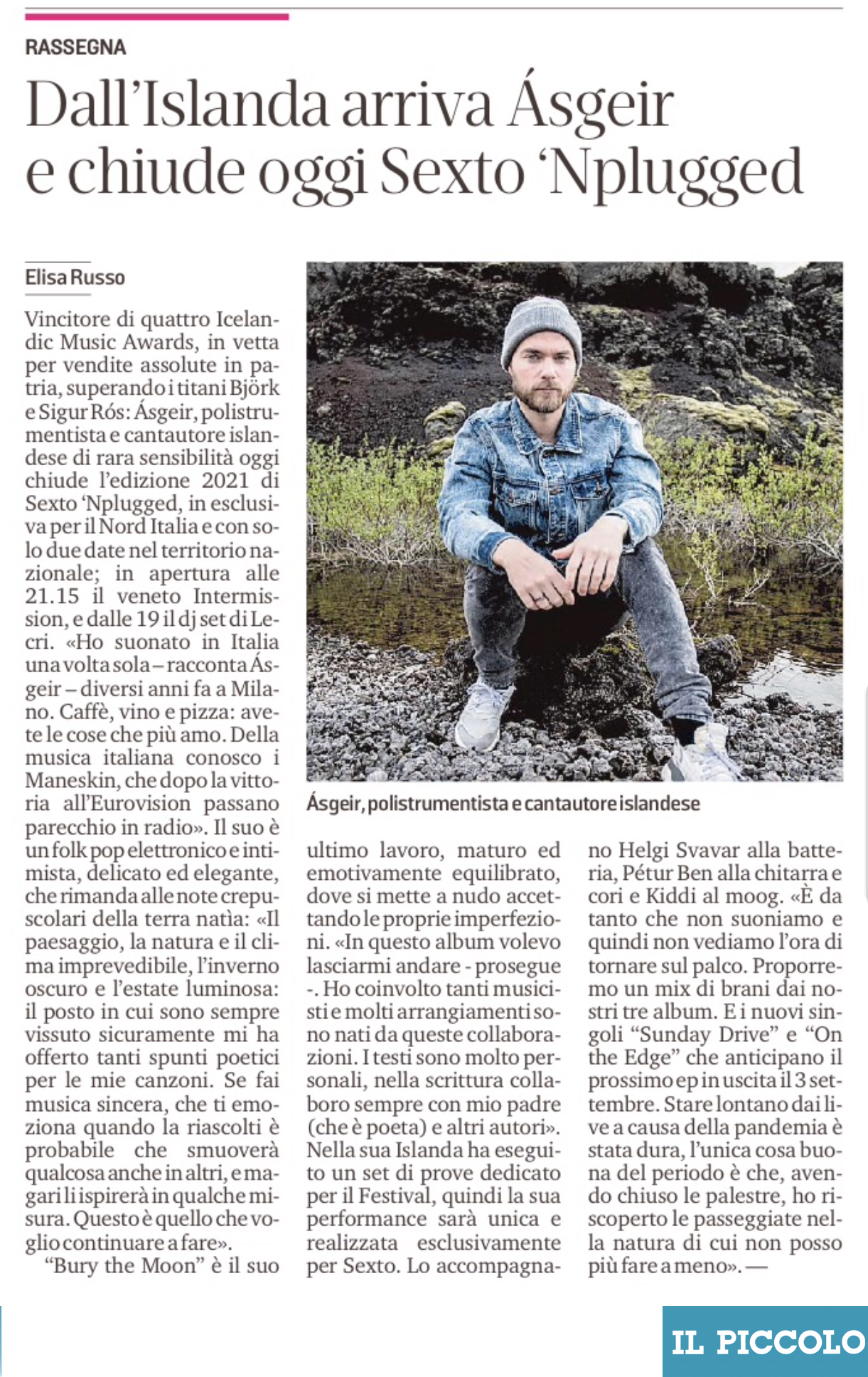 Have you played any dates in Italy yet? What do you know/think/like/dislike about Italy and do you know of any italian artist/bands?

I have played in Italy once before, In Milan, probably about five or six years ago. We only stayed there for one day but I remember that it was a good day and we got to see the city a bit and enjoy good food and coffee. The most recent italian band that comes to mind is Maneskin which won the eurovison song contest. They were played on the radio a lot after winning the contest. I’ve know that Italy has some of the most amazing coffee, wine, pizza and these are all things that I love.

These shows we’re doing in Italy are our first in a long time so we are very excited to be playing again. We’re now a four piece band, with Helgi Svavar playing drums, Ptur Ben playing guitar and singing backing vocals and Kiddi playing moog bass. We’ll be playing a mix of songs from the three albums. We hope to share a good time with the audience and celabrate playing live again.

Answered these two together –

I wanted to let go a bit more on this album, and try my best to not overthink things. I knew I had a collection of songs that I was happy with so I wanted the recording process to not get to complicated or heavy. I worked on it mostly with Kiddi, a producer that I’ve been working closely with since my first album. We got a lot of different musicians to play on the album and some of the arrangements came from collaborating with them. Some of the lyrics are more personal on this album then what I’ve done in the past, although I’m still collaborating my father, my friend Julius and a few other people, the subject of some of the lyrics are more personal.

I try not to think about touring at all when I’m working in the studio. The live part is a seperate thing that we don’t really start to think about until we’re about to go on tour. Then the band comes together and we figure out a way of delivering these songs in the best way live. Sometimes we play them excacly how they are on the albums but sometimes we change them a little.

Probably more than I realize. It’s hard to say excactly though since I haven’t lived anywhere else. But It definetaly comes out in a lot of the lyrics, the landscape and the unpredictable nature and weather, the dark winter and bright summer, is all good subjects for lyrics and poetry.

’t have any one message that I’m trying to communicate. But I’ve found that if you make music that comes from a real place, and it moves you when listen back to it, it’s probably going to resonate with a few other people and maybe help them through something in life or ispire them in some way. I think that’s worth something and it’s something that I hope I can keep doing.

Making my first album was a really big thing for me and I’m forever grateful for everone that helped me with it. I was just 19-20 years old at the time and had basicially just been making songs in my bedroom before that and all of a sudden I was playing on big stages in Iceland and touring around the world. The Sydney Opera house shows are highlights for me, also supporting Alt-J in Australia in a run of arena shows. Touring the circle around Iceland playing in churches and small venues has been a great experience. All the wonderful shows we’ve done in Europe. And just being able to see so much of the world, meet so many people, see how the music connects to people in different ways, I’m thankful for it all.

I haven’t been able to tour or play any shows, except for a few streaming shows. I’ve just been at home in Iceland using the time to work on music, work on my health, spending time with family. I haven’t been super inspired during this time but I think there was something good about how everything slowed down. The gyms closed down for example so I started walking and running outside and I’ve become a little addicted to it. I sort of rediscovered how good it feel to be to be in nature and how refreshing it can be.

We have a few shows coming up in the fall, but no touring until next year. “Sunday drive” is the first song released from an EP that will be out in a few months. Now I’ve mainly been working on a collection of songs that will hopefully come out sometime next year.